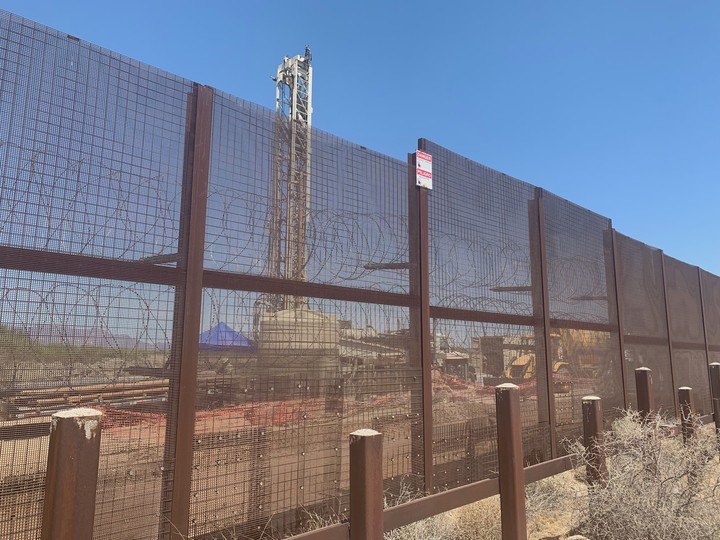 An environmental drill behind the US/Mexico border wall as construction of the new section of wall begins at the Organ Pipe National Monument, August 23, 2019. Photo credit: AZCentral.com

Some aquifers compact when groundwater is pumped out of water wells too quickly. This overpumping is termed, “groundwater overdraft,” and causes the level of the ground to sink on the order of centimeters each year; exemplified in this iconic photo illustrating the long-term implications of subsidence in California's Central Valley.

In transboundary aquifers - regions where different diplomatic entities share groundwater - there is often a gap in the sharing of data across political boundaries, especially where those boundaries delimit geopolitical tension. A number of these aquifers are susceptible to irreversible compaction due to groundwater overdraft.

To illustrate the potential value for diplomatic accountability using this technique, we ran subsidence analyses using data from the Sentinel-1 constellation and the Stanford Method for Persistent Scatterers in two regions with shared aquifers and geopolitical tension: the US/Mexico border and the southern Jordan River Valley.

We found mean subsidence rates of 5 cm/year near a cluster of pivot-irrigated agricultural fields just on the Mexico side of the border with New Mexico.

In the region of the Dead Sea, results suggest subsidence mirroring the political boundaries drawn during the Oslo Accords around the ancient city of Jericho in the Israeli-occupied West Bank. Agricultural regions in Jericho subsided at a rate of 10 cm/year in 2018.

Subsidence around Jericho is likely driven by Palestinian reliance on groundwater resources from shallow Holocene alluvial aquifers underlaying agricultural regions of date palm plantation in eastern Jericho. Interestingly, in regions of date palm cultivation under the control of Israeli settlers, there is not such dramatic subsidence.

In their research on the political role of date palm agriculture in the West Bank, Julie Trottier, et al, explain that the Israeli Water Authority and Israeli settlers are advancing recycled wastewater reservoirs for date palm irrigation but Palestinian farmers are reduced to using shallow saline groundwater or available springwater.

Subsidence monitoring in transboundary aquifers can be used, where applicable, for an unbiased monitor of aquifer condition in pursuit of transparency, accountability, and sustainability of shared groundwater resources.